I recently completed a proof-of-concept project to see if it would be possible to predict traffic congestion in Washington, D.C. (where I live) based on political / governmental activity and overall volume of significant events.

I am pleased to say the results are encouraging, and the models I built perform reasonably well at predicting high-level classes of traffic congestion. This post includes an overview of the project, and the jupyter notebook with code is available here.

Traffic in the District of Columbia is bad; that much is a given. But what if you could know ahead of time just how bad it was going to be–tomorrow?

Mapping and directions apps like Google Maps, Waze, etc. already do a pretty good job of showing where the traffic is bad right now. They also estimate travel time in traffic based on whether or not you are traveling during rush hour.

But as anyone who lives or works in the District will tell you, there are those days when the traffic is really bad… as well as some when it’s surprisingly not so terrible. What if we could predict those patterns in advance, so that you could get a sense of tomorrow morning’s traffic the night before–just like a weather report.

If that were possible, what could we use to make that prediction?

In the years I’ve lived here, I’ve often wondered if there was any link between politics/government (still the city’s primary industry) and traffic. The intuition is twofold:

In this project, I set out to create a proof of concept of the idea that, by monitoring upcoming political/government events (and any other very large events), we can adjust the probability of how bad tomorrow’s traffic will be.

Traffic (and transportation generally) in a major metropolitan area is a complex and highly dynamic system. The objective is like a weather report for traffic–and I believe there is something deeper to that analogy. Weather is highly complex, driven by the interaction of many natural processes, which are themselves complex. While I suspect traffic may not have the exact same level of complexity, it is also impacted by many diverse factors.

With this in mind, it seemed especially important to be very deliberate about containing the scope. This meant gathering data and selecting features with the following criteria:

Further, I decided to focus my analysis on morning traffic only. There are numerous reasons for this, but the most compelling is that, in my experience at least, evening rush hour traffic seems to follow wholly different rules than morning traffic. If it is predictable, I suspect it has completely different predictors.

This analysis covers the time period of April 12 through May 19, 2017 (excluding weekends). This leads to a relatively small sample size of 27 weekdays (one day’s data was lost). This was necessary given the time constraints of the current project, but it is obviously smaller than I’d like. However, this is a living project, and I intend to maintain the data collection and retrain the model periodically to improve it.

Informed by the scoping considerations above, I collected the following data that I thought might have some impact on traffic. For each day:

I had hoped to gather similar information about White House / Presidential activities. However, the current administration has broken with precedent and no longer publishes the President’s public schedule online.

To collect traffic information, I utilized the Google Maps Distance Matrix API. This API returns distance, duration, and duration in traffic for a given route. I compiled a list of 24 major traffic arteries within the District and gathered duration data from the API between 7 a.m. and 10 a.m. in 10-minute intervals.

The blue lines on the satellite image below depict the routes that were tracked. All routes were defined as “outside-in” in order to measure “with traffic” commuting times. That is, the origin was the point furthest from the city center, and the destination was closest to the city center for a given route. 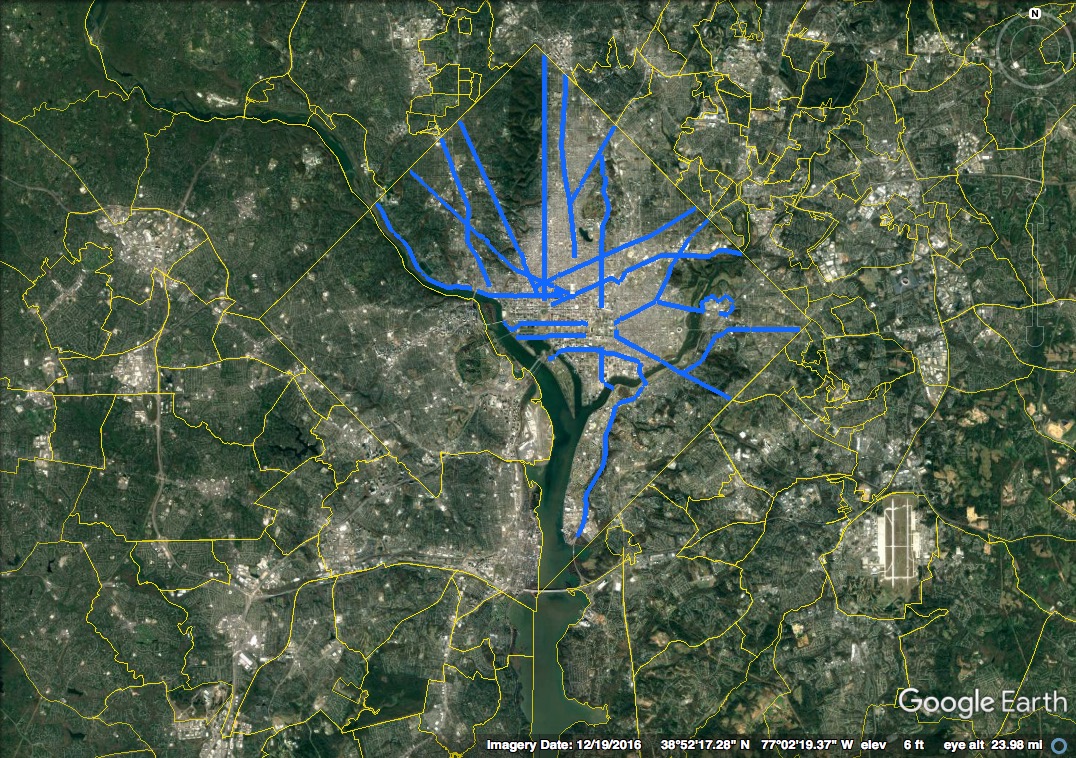 After numerous iterations of regression modeling and classification modeling, I came to the following results: Using classification algorithms, the events data seems to provide a reasonably reliable predictor of whether a given day’s traffic will be:

Another side note: I had hoped to be able to predict the amount of traffic delay in time (regression modeling), but it was unsuccessful. However, given the small sample size, I don’t believe that the results of this exercise disprove the ability to predict traffic times with this data. I will test this again once I’ve collected enough more data.

I consider this to be a living project and plan to continue developing and refining it. In particular, I plan to continue gathering data to build a larger, more significant dataset to model against. I’ll use this data to retrain the current models, as well as explore whether the additional data allows for greater results using different methods (maybe even regression will work).

If you’re interested in seeing the code and more graphs, please check out the jupyter notebook!